Revered as the Crystal Mother amongst the gemstones, Rose Quartz is also the Stone of Opening and World’s First Love token dating back to 500 B.C! Rose Quartz made ancient Egyptians and Romans decide unanimously on beauty and Love in addition to guaranteeing the shade brings bliss, beauty and the beloved! Often addressed as the Stone of Love, Rose Quartz is a soft crystal with a soothing Anahata or Heart Chakra Energy. Most of you have seen Rose Quartz the past year as it was declared the Color of the Year in 2016 too.

Rose quartz is the stone of endless love. The rose quartz meaning is divine love because it is a gentle energy stone that raises your heart chakra located around your heart. It can boost your health by enhancing blood circulation physically. Emotionally, rose quartz is the best support stone that can replace any best friend because this one has superpowers.

You can use rose quartz to cleanse and purify the heart from negativity, evil or grief. It can restore the balance to your emotional intelligence and speed your recovery from diseases. The gentle energy of rose quartz is embracing and warm. It envelops you in safety from others and yourself. When bonded with, rose quartz can help you fulfill wishes such as finding your true love.

If you are afraid or pulled down in life, rose quartz can pick you up. It is the best stone for leaders too because rose quartz can make you an excellent listener. Legends say Cupid gave mankind the gift of love in the form of rose quartz. Now wouldn’t you want a taste of Cupid’s perfect love?

A deeply moving stone with gentle vibrations, Rose Quartz opens the heart of the wearer to all types of love ranging from self-love family to Friend, Animals and Mother Nature!

Rose quartz may not be hard as diamond, but it is a durable stone with 7.0 on the MOHS scale. If you have a rose quartz, handle it with care. Try not to do heavy work while wearing or using the stone. Falling down can break it!

You can find rose quartz deposits all around the world in Brazil to India, South Africa, Namibia, Sri Lanka, South Dakota, Madagascar, and USA.

Rose quartz is considered ideal for people born under the zodiac sign of Scorpio (October 22 to November 23), Taurus (April 21 to May 21) and Libra (September 23 to October 22).

The ruling planet of rose quartz is mars﻿. It brings courage, perseverance and action.

Rose quartz is found in a variety of colors such as White, Red, Peach, Blue, Cream, Pale Purple, Pink and Rose.

The vibration of rose quartz is recorded as 7. If you’re wearing rose quartz, choose the number to be lucky throughout the day.

Rose quartz is the queen of the heart chakra, it nourishes and fills you with love. But, it also raises the root chakra to balance your energy and ground you. A crystal that symbolizes irrevocable, unending and unconditional love, Rose Quartz is a uniquely colored crystal which was once available only in large amounts. The energy of Rose Quartz is so strong that it woos the nature, earth, sky, ground, air, water, fire and other elements in a wink!

A stable color that does not fade under sunlight, Rose Quartz can take heat up to 500 0C.

The captivating shade of Rose Quartz is rare and owes it to the presence of titanium, iron and manganese in the silicate matrix. Found in textures of pink seen as hazy to grainy and transparent, translucent and opaque, Rose Quartz also grows with many other gemstones including aquamarine and tourmaline! Displaying colors ranging from pale pink to rose, rose quartz is also seen in deep colors. A deep lavender shade is the trademark of Rose Quartz. The rose healing crystal is ideal for healing pains and disorders of the heart in addition to introducing emotional freedom to the wearer.

The presence of phosphate and aluminum in pink colored quartz results in the making of Pink Quartz, giving it the dark pink crystalline hue. The most important difference between the official quartz of the same shade is that Pink Quartz occurs in crystals, unlike Rose Quartz. In addition, Pink Quartz fades if the temperature is above 200 0C and faster than the Rose Quartz.

Often seen in mild red to deep rose to pink shades, Red Rose Quartz has streaks of white on it. The calming stone has the highest energy for healing and magic rituals using crystals. Red Rose Quartz is formed from Iron, Titanium and Silicon Dioxide as natural inclusions. A unique rose quartz that is also the priciest Rose Quartz displays a shade of baby pink on the edges with yellow insides and whitish pink outside. The pink Madonna was mined from Minas, Gerais in Brazil 60 years ago. A variety of rose quartz where the reflections forms a 6-ray star with a vibrant pink color is a rare quartz too. The emotionally uplifting stone can realize love for star-crossed couples too. Most of the Star Rose Quartz around the world is mined from the ores of Madagascar.

Spanning from pale white to peach and soft pink, Mozambique Rose Quartz is a cloudy crystal with exceptional soothing energies. Mined from Mozambique, white rose quartz is a cabochon with white streaks or flashes on it. 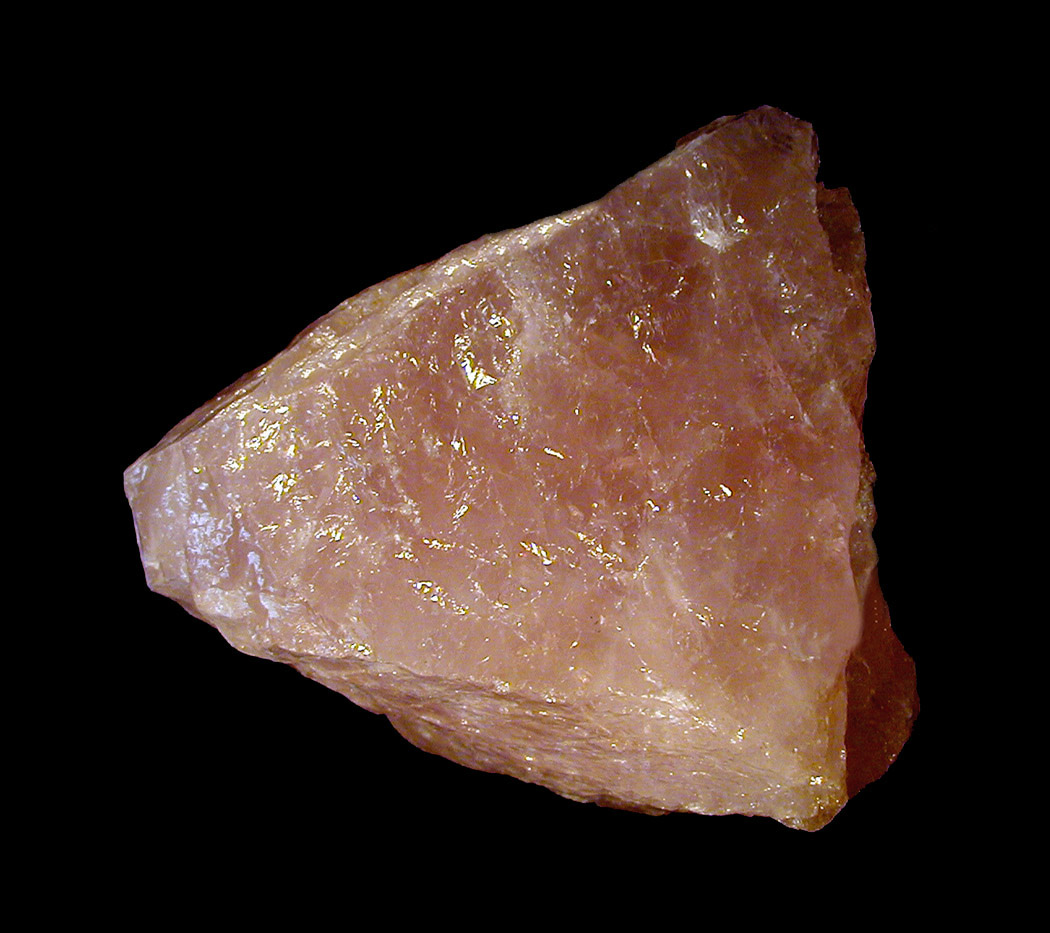 Mined from Galilea, this Rose Quartz is a peach colored variety of rose quartz with a tint of red at places. Galilee Rose quartz is a unique stone with a mellow mix of white, pink and red that epitomizes success in romance. A unique stone that emanates an aquamarine hue, rose quartz found in Ambatondrazaka, Madagascar occurs cocooning the blue beryl.  A smoky form of blue rose quartz surrounded by whitish pink, Madagascar Blue Rose Quartz is a rarity known to heal physical wounds in addition to the emotional ones. Yet another supra powerful healing rose quartz that occurs naturally with black tourmaline, Rose Quartz is a pink plus black colored stone. Schorl Rose Quartz is often found in the ores of Minas Gerais in Brazil. The unique rose quartz crystal can shield you from outside and inside harms! With needle like inclusions, the pink variety of rose quartz is often famed as the rutilated rose quartz. The stone naturally occurs with deep red needles inside the rose tinted quartz crystal. Rutilated Rose Quartz can be used spiritually to grow the powers of intuition. One of the most unique of rose quartz, shamanic dream rose quartz has baby pink inclusions in the shape of trees and forests in a background of multiple colors including yellow, green and brown. Mined from Brazil, Shamanic Dream Rose Quartz can trigger dream therapy, recall or consciousness when polished. In addition to being the Stone of Love, Rose Quartz is also a stone of beauty. Washing and massaging your face with rose quartz induced water smoothens and conditions your skin, in addition to removing wrinkles.

Rose Quartz can help in amplifying the healing power of your body in desperate situations such as cuts, injuries, burns and rehabilitation. The etymology of Rose Quartz roots back to the rosy tint the gemstone emanates, unlike seen in most crystals. Rose Quartz is also capable of boosting the cure of lung disorders, chronic coughs and throat pain.

For those with blood circulation issues, wearing Rose Quartz on the heart chakra will do the healing.  A panacea to various other ailments of the heart including blood pressure, cholesterol and diabetes, Rose Quartz helps in manifolds of ways!

It does not stop there folks! For expecting mothers, it is wise to wear a rose quartz pendant long until your stomach to keep your baby happy as well as for preventing premature delivery. One of the few crystals that raise your consciousness, rose quartz also connects the wearer with the higher realm. The only condition is that you must wear Rose Quartz on your heart chakra until your heart vibrates to the divine frequency.

Wearing rose quartz helps in connecting with Mother Universe and being human!

Once considered the sole medium to connect with one’s guardian angel, rose quartz helps in finds your inner self that you’ve never met before. From divine vision to feng shui and intuition, Rose Quartz is capable of instilling a wide variety of Supra Powers. A bright ray of hope, happiness and healing, rose quartz also harbingers new gates to your life. Pink quartz is a feminine stone that also enlightens you to accept reality as it is.  A vital benefit of adding Rose Quartz to your routine is relieving the mind.

The Opening Stone also changes the mind and displaces the negativity with positivity. From helping the wearer see the ultimate truth in situations to having new faith, Rose Quartz erases PTSD, depression, paranoia, schizophrenia and seizures too. 1.      In the Middle Ages, Rose Quartz was frequently used as a Feng Shui crystal to keep harm away from homes.

2.      Rose Quartz is also the traditional gift given to couples who are celebrating their 2nd Wedding Anniversary.

3.      Twin Rose Quartz Crystal can be used for Rituals to attract your true love.

4.      Pink Quartz and Rose Quartz are made in different ways in nature and not the same. Former forms crystalline structure while the latter remains unmarred and deep.

5.      According to Egyptians, Rose Quartz stopped aging and removed wrinkles. Many tombs were found by archaeologists where the mummies had face sculpted of Rose Quartz! If you’ve given up on love or forgiveness, a few days with Rose Quartz on your Heart Chakra will transcend your emotions and make you a new person!

Rose Quartz is an all-seeing Motherly stone that every person must always keep close.

From managing stress to alleviating pain, Rose Quartz is excellent for physical and emotional woes of the heart.

If you were alone, jaded and miserable just a while ago, we have the Mother of Gems to get you back up!